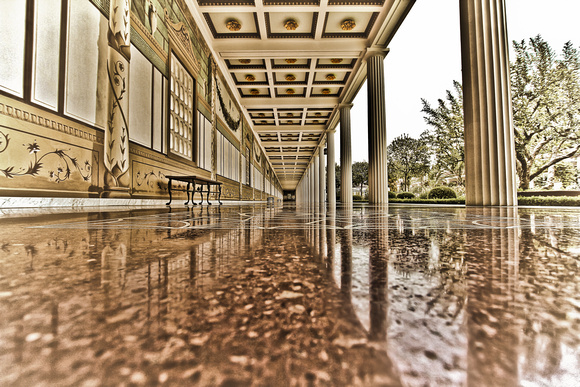 In 1954, oil tycoon J. Paul Getty opened a gallery adjacent to his home in Pacific Palisades. Quickly running out of room, he built a second museum, the Getty Villa, on the property down the hill from the original gallery. The villa design was inspired by the Villa of the Papyri at Herculaneum and incorporated additional details from several other ancient sites. It opened in 1974, but was never visited by Getty, who died in 1976. Following his death, the museum inherited $661 million and began planning a much larger campus, the Getty Center, in nearby Brentwood. The museum overcame neighborhood opposition to its new campus plan by agreeing to limit the total size of the development on the Getty Center site. To meet the museum's total space needs, the museum decided to split between the two locations with the Getty Villa housing the Greek, Roman, and Etruscan antiquities. In 1993, the Getty Trust selected Rodolpho Machado and Jorge Silvetti to design the renovation of the Getty Villa and its campus. In 1997, portions of the museum's collection of Greek, Roman and Etruscan antiquities were moved to the Getty Center for display, and the Getty Villa was closed for renovation. The collection was restored during the renovation.