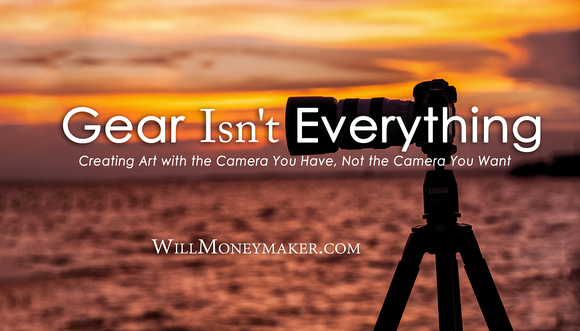 Photographers often feel as if they’re caught in something of a rat race – the race to get the best camera, the perfect optics and thousands of dollars of accessories, equipment and editing software that will help create the best possible images. However, at a certain point, we all have to stop and think: Is it the camera or the photographer that is responsible for creating works of art? Eve Arnold answered that question when she said, “It is the photographer, not the camera, that is the instrument.” I tend to agree.

When to Stop Blaming Your Camera

Of course, we do need the right equipment to take great pictures – after all, an artist wouldn’t be able to create an oil painting with only watercolors, and a photographer can’t create sweeping landscapes or macro images with a disposable camera. It’s common for beginning photographers to say that their images seem blurry because they’re relying on less-than-perfect kit lenses, or the lighting isn’t quite right because they don’t have fill flash.

However, once you start blaming your gear for the shortcomings of your art, it’s hard to stop. Worse, it sets you up for failure in the long run. There are thousands of would-be photographers who spent their formative years blaming their equipment for each flaw in their photos. Imagine the disappointment that many of these photographers must feel when they finally purchase the best gear money can buy, only to realize that the problem was never the camera at all, but the artistic vision behind the camera.

It’s important to remember that for nearly two centuries, photographers have been creating images with whatever they have had on hand. The earliest famous photographers created timeless art with cameras and equipment that, were a modern manufacturer to produce them today, would be laughable by current standards. Even many modern photographers use cameras and equipment that would raise an eyebrow in some circles. Yet these photographers are proving that it is possible to create something beautiful, whether you’re using the latest DSLR, an old Polaroid or something like a Diana camera.

The point is that whatever equipment you have, you can make it work. The camera is only a tool that captures what we see in our mind’s eye, and even the best cameras have limitations. Rather than blaming your equipment for its shortcomings, find a way to work around them or better yet, find a way to work with them.

For instance, working with the flaws of a Diana camera is what makes lomography an art form. Without the odd light leaks that create interesting effects, there would be nothing unique, unusual or even particularly interesting about these kinds of images.

When we get lost in the constant cycle of upgrades, it’s easy to forget that the art isn’t made inside the camera. There is no denying that better equipment will help you achieve technical perfection, but no camera in the world can capture the soul of the photographer and his subject.