It may surprise you to learn that photography has roots far older than two or three centuries of science. In fact, photography started with a simple device known today as the “camera obscura.” What is a camera obscura? In Latin, the words mean “dark room,” and that is a succinct and accurate description of this device.

A camera obscura is an empty room without light but for a small pinhole in one wall. The light that comes through that pinhole projects a scene from outside on the opposite wall. Because of the nature of optics, this scene is always upside down, but nevertheless, it provides an accurate picture of whatever the camera obscura sees. Let’s delve a little bit more deeply into the fascinating history of this device and how it led to the modern-day camera!

The First to Capture Light

The camera obscura was first imagined by a Chinese philosopher named Mozi. Over the course of his studies, he the way that light created images on the walls of a dark room when it entered the room through a pinhole. Of course, he called the camera obscura by a different name — the “locked treasure room.” This first discovery illustrates just how old the science of photography is. Mozi’s work is the first in recorded history, taking place around 400 B.C.

After Mozi’s first conception, the camera obscura underwent centuries of further development before being put to a practical use. Notable philosophers and scholars like Aristotle and Theon of Alexandria wrote about the concept, but it was Anthemius of Tralles that was one of the first in recorded history to actually use the camera obscura. Around 530 A.D., he used a primitive form of the camera obscura for architectural projects. 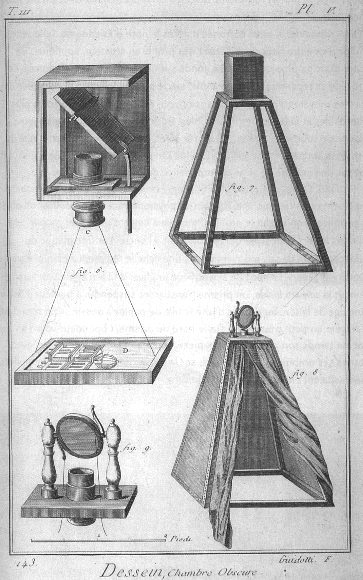 The First Lenses and Mirrors

Work on the camera obscura continued on among scientific communities for another thousand years. Scholars such as the Arab physicist Alhazen, Chinese scientist Shen Kuo and even Leonardo da Vinci all played rolls in the further development of this technology. However, it wasn’t until the mid-1500s that glass lenses and mirrors were introduced as a way to direct images into special viewing areas. Around this time, the camera obscura was a popular way to view solar eclipses.

Prior to 1558, the camera obscura was purely a scientific endeavor. That all changed when an Italian scholar by the name of Giovanni Battista Della Porta advised artists to use the device to their advantage. From then through the rest of the Renaissance period, artists adopted the camera obscura as a way to perfect their sketches and paintings. Using it, it was possible to trace your subject, making artwork highly realistic.

Almost 50 years after Porta’s declaration, in 1604, the term “camera obscura” was coined by a German astronomer named Johannes Kepler. Kepler is also responsible for developing the very first portable camera obscura — a tent, with a sheet of paper inside onto which the image from the camera’s lens could be projected.

Throughout the 17th and 18th centuries, the camera obscura continued to evolve. As the technology developed, it became a popular attraction, similar to how we enjoy going to movie theaters today. Throughout the 1700s, these devices became smaller and smaller. So small, in fact, that Sir Joshua Reynolds, an English portrait artist, used a camera obscura that was made to look like a book between 1751 and 1790.

Then, in 1816, Joseph Niepce began creating what many believe to be the world’s first photographs. He used a camera obscura to expose paper covered in silver chloride to light. The resulting images were blurry and they faded quickly, lasting only a day at the most. Nevertheless, he continued to experiment, and then in 1829, he started working with Louis Daguerre. Neipce died in 1833, but Daguerre kept working, and in 1835, he created the first daguerreotype.

From the daguerreotype, the rest is history. However, curiously enough, even though we have modern cameras in all shapes and sizes, the camera obscura isn’t simply a relic lost to history. In a select few places around the world, you can still visit a camera obscura, and educators often use them to teach students about light and optics. In fact, if you search online, you’ll find several tutorials that will show you how to create a camera obscura in your own home. Perhaps the next time you’re enjoying a lazy weekend away from the studio, you should turn one of your home’s rooms into a camera obscura so that you can experience light the same way that Mozi did.