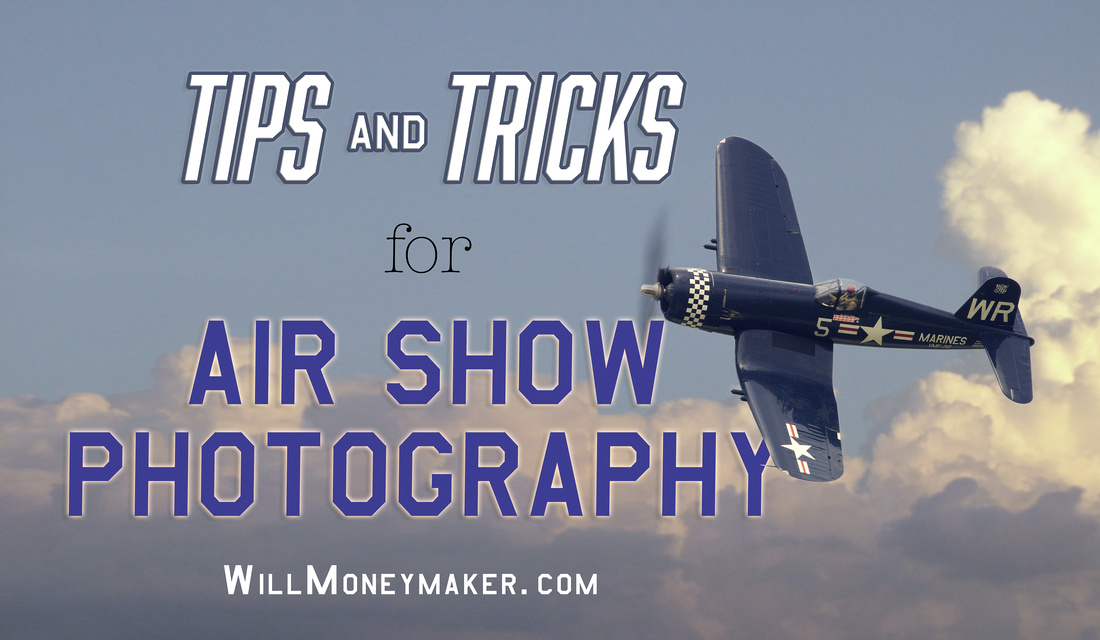 Air shows are not something that the average photographer stops to consider often, but I’ve found that they’re one of the most amazing events to attend with your camera. In fact, a distant cousin of mine was once a captain for the Blue Angels, so perhaps that is where my love of aviation comes from. I’ve attended quite a few air shows over the years, and I can tell you one thing — there is certainly no lack of artistic opportunities.

To that end, I want to show you how to approach an air show as a photographer. This includes not only the equipment you’ll need, but also some of the shots you should look for and techniques to use. Let’s start with the equipment! 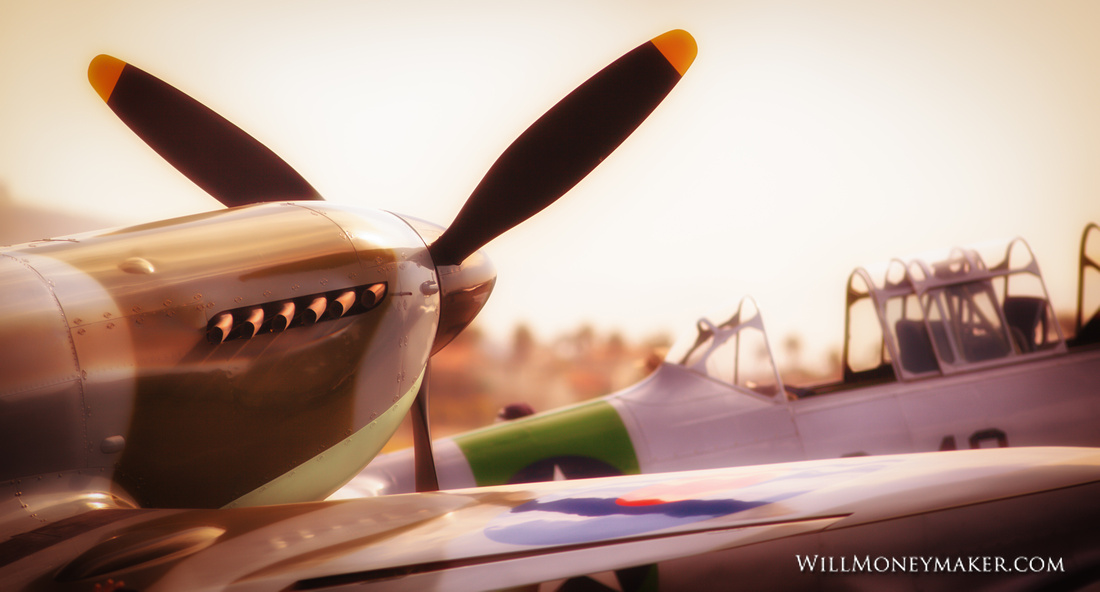 Air shows are unlike many other activities in that you’ll need to take quite a bit of gear along, but at the same time, you’ll also need to maintain mobility. Start your air show kit with your camera and a pair of zoom lenses — you won’t want to haul around several primes, and you’ll need the ability to quickly adjust focal length on the fly. Make sure your two lenses cover a broad focal length; say an 24-70mm and a 100-400mm lens. In fact, if you have a spare camera body, you may even want to take it along and so that both lenses are mounted at all times. 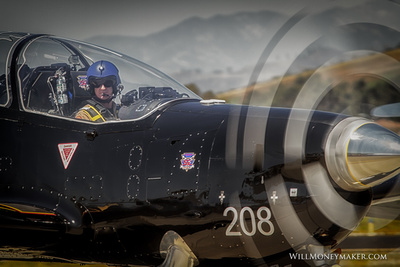 Short Tucano T1The Short Tucano T1 (S.312) is a two-seat turboprop basic trainerused by the Royal Air Force. It is a licence-built version of the Brazilian Embraer EMB-312 Tucano, and is also used by the air forces of Kenya and Kuwait.

The next big requirement is this: Portable storage. You see, at many air shows around the United States, large containers like backpacks and coolers aren’t allowed. Before you attend a show, make absolutely certain that you’ve checked the rules to see what items are prohibited. If you can’t take along a backpack or large bag, then you might be able to get around this with the clever use of cargo pants or a photo vest. As long as your two largest items — the cameras and lenses — are hanging around your neck, almost everything else can be safely kept in pockets, provided you have enough of them.

Another important point is to make sure that these items are secured in plastic zipper bags. Not only will this keep you from accidentally dropping small things like memory cards, but it will keep your gear safe from perspiration or moisture.

Now, on to the gear that you’ll need to put in those pockets: 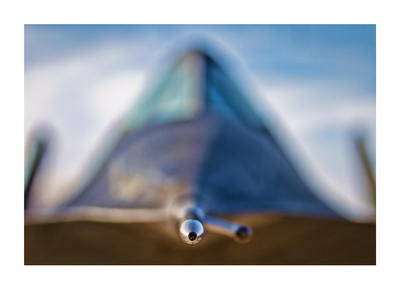 Lockheed SR-71 "Blackbird"The Lockheed SR-71 "Blackbird" was an advanced, long-range, Mach 3+ strategic reconnaissance aircraft. It was developed as a black project from the Lockheed A-12 reconnaissance aircraft in the 1960s by the Lockheed Skunk Works. Clarence "Kelly" Johnson was responsible for many of the design's innovative concepts. During reconnaissance missions the SR-71 operated at high speeds and altitudes to allow it to outrace threats. If a surface-to-air missile launch was detected, the standard evasive action was simply to accelerate and outrun the missile.

The last point is whether or not you’ll want to bring a tripod or monopod. Tripods are a no-no. You’ll be moving around too much to use it and you won’t enjoy lugging it around all day. Monopods can be helpful, but they can also get in the way. If you’d like to try one, think about getting a telescoping model that you can fit in a pocket or hang from a wrist strap — or be prepared to use your monopod as a walking stick throughout the day. 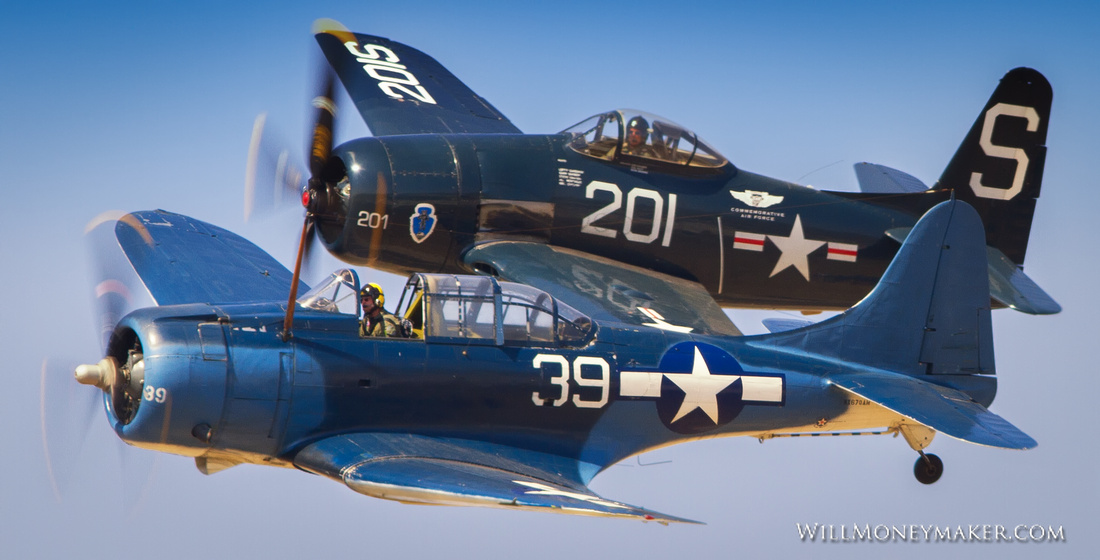 Grumman F8F Bearcat and Douglas SBD-5 DauntlessThe Grumman F8F Bearcat (affectionately called "Bear") was anAmerican single-engine naval fighter aircraft of the 1940s. It went on to serve into the mid-20th century in the United States Navy, theUnited States Marine Corps, and the air forces of other nations. It would be Grumman Aircraft's final piston engined fighter aircraft.

Planning the Event: Which Times are Most Important?

You might be thinking that the afternoon is the most important part of the air show — and, you’d be right, because, after all, that is when the action is at its highest. However, you cannot discount other times of the day, or even other days of the show. 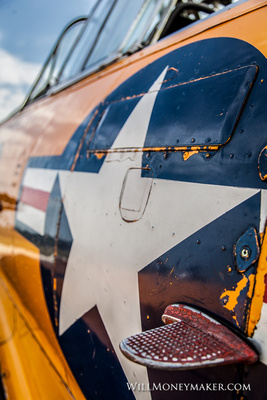 You see, if you’re planning to tell a story with your collection of images, then like any story, you need a beginning, middle and end. This means that you should show up early in the morning, or even the day before the air show, to photograph the beginnings of the show — morning sunlight, dew on fenders, crews pulling drop cloths away from planes and so forth. These sort of “pre-game” images not only give your viewers a more complete story, but as crews get ready for the air show, you’ll find many interesting, artistic ideas.

Close the event by photographing evening festivities the next day, or even visit the air show site the day after the show to document the packing and cleaning process. Here, you’ll find so many opportunities, from golden evening sun bathing planes and silhouetted planes flying into the sunset, to tired crews and satisfied air show attendees after a long day of enjoying aviation.

Of course, it isn’t 100% necessary that you be available and taking photographs throughout the entire event, including the day before and the day after. However, you’ll find that by choosing days and times wisely, you’ll be shooting in a variety of different atmospheres, from anticipation, to excitement and beyond, and you’ll have no end of uniquely interesting subjects to photograph. 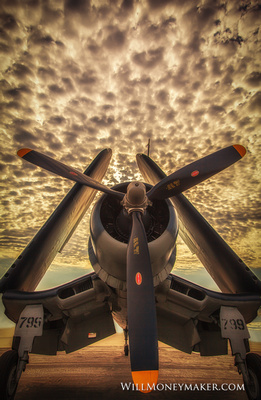 The single most important technique that you’ll need to learn well in advance of the air show is how to pan your camera. What this means is that you need to know how to move your camera to follow a moving object so that the focus stays locked on your subject. You can practice this at home any number of ways — pan to follow flying birds or cars passing in front of your home. Practice makes perfect, so keep working on your panning skills until the majority of your shots feature sharp, clear moving subjects.

Other techniques and effects, such as narrowing the depth of field or deliberately over or underexposing images are a matter of personal preference. It is unlikely that you’ll want to go too crazy with effects, but at the same time, don’t hesitate to be creative and original. Learn your primary objective (either documentary photography, creative photography or a mixture of the two) before you attend the air show so that you can stay organized and get the shots you want, be they creative abstracts or crystal clear documentary images.

The other thing you’ll need to be aware of is speed. In other words, the speed of spinning propellers or whirling rotors on helicopters, and the speed of planes flying past a static background. Experiment with different shutter speeds to attain the desired effect. I try to keep my shutter speeds between 1/25 and 1/125 to maximize the feeling of motion. When the rotors are blurred on a helicopter that is sitting on the ground, that shows it is landing or taking off. If you instead froze those rotors with a high shutter speed, viewers would assume that the helicopter was sitting still. For jet aircrafts, I set my camera to aperture priority. 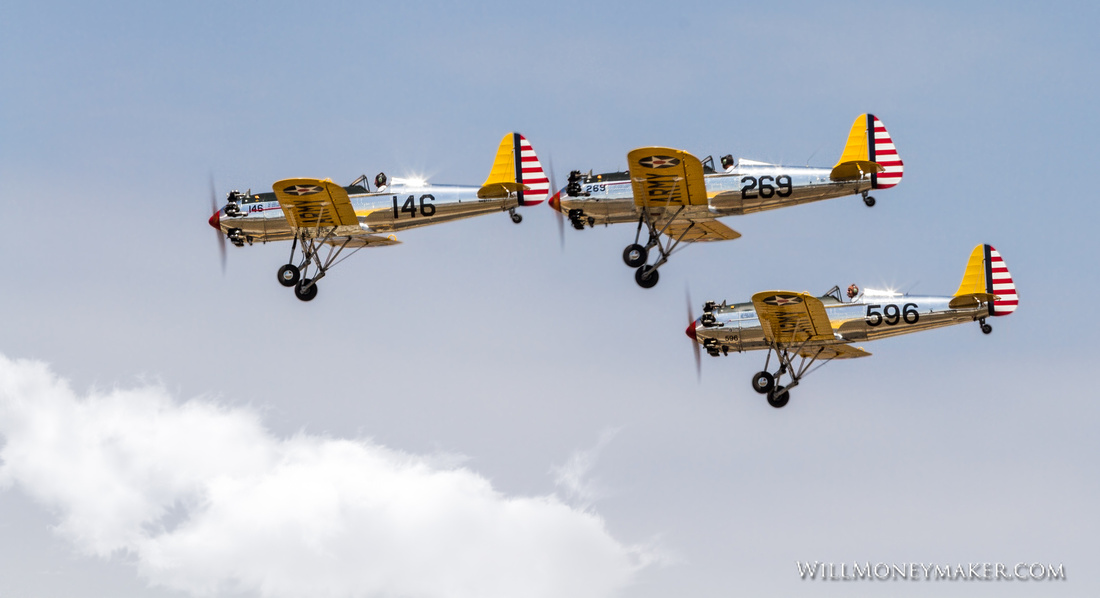 941 Ryan Aeronautical ST3KRThe Ryan STs were a series of two seat, low-wing monoplane aircraft built by the Ryan Aeronautical Company. They were used as sportaircraft, as well as trainers by flying schools and the military of several countries.

The same goes for planes moving past backgrounds, especially during takeoffs and landings. Use a slightly slower shutter speed and pan with the plane to show a blurred background, otherwise it will appear as if the plane isn’t moving.

The final point is to always be aware of your location in relation to your subject and its background. More than likely, unless there are dedicated viewing platforms, you will always want to be at the forefront of the crowd so that they aren’t sneaking their way into your frame. For shots that are near to the ground, you’ll want to make sure that you’re that you’re pointed in a suitable direction so that your background isn’t comprised of air show attendees or other undesirable and distracting elements.

The Types of Photos You’ll Capture 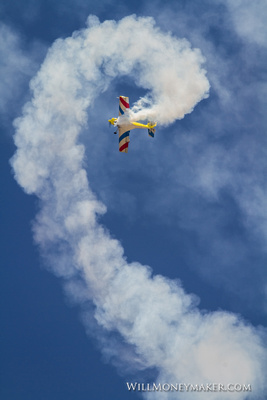 The Tumbling Bear (Rob Harrison)Rob Harrison puts the Zlin 50 LX through it's paces and creates a crowd pleasing display ofaerobatics. The "Tumbling Bear" fills the sky with twisting and tumbling smoke trails that display Rob's aerobatic talent and the capability of the Czech built Zlin 50LX. Rob honed his aerobatic skills at the Zlin advanced aerobatics school and then ordered his first Zlin 50.

“Portraits” of airplanes come in a couple of different varieties. These could be images of grounded planes or planes that are landing and taking off. These types of images follow standard artistic rules: Keep the plane out of the center of the frame unless the composition demands it and minimize distracting elements (like the crowd in the background). Planes that are landing or taking off often benefit from being positioned to one side of the frame to show the path that they are traveling.

Ground to air photos are the type that you’re probably looking most forward to taking. This is photography of planes in flight, and there are many ways to go about this. Some planes might be leaving smoke trails, in which case, you’ll want to capture those trails. Other planes will be flying in formation or doing different kinds of tricks. In each case, attempt to tell the story with your composition. In other words, capture the entire formation in your frame, or if a plane is doing something interesting, like a barrel roll, capture the plane as it tilts to the side or when it is fully upside-down. Wherever possible, (unless you’re capturing long smoke trails) fill the frame with the plane or the formation to show as much detail as possible.

Air-to-air photography involves photographing planes while you’re flying in another plane. This isn’t something I’ve had the chance to do yet, myself, but if you ever have the wonderful opportunity, then there are a couple of things to remember. You’ll need to work hard to keep your camera stable, and you may even want to buy or rent cameras or lenses that come with motion stabilization and vibration reduction. 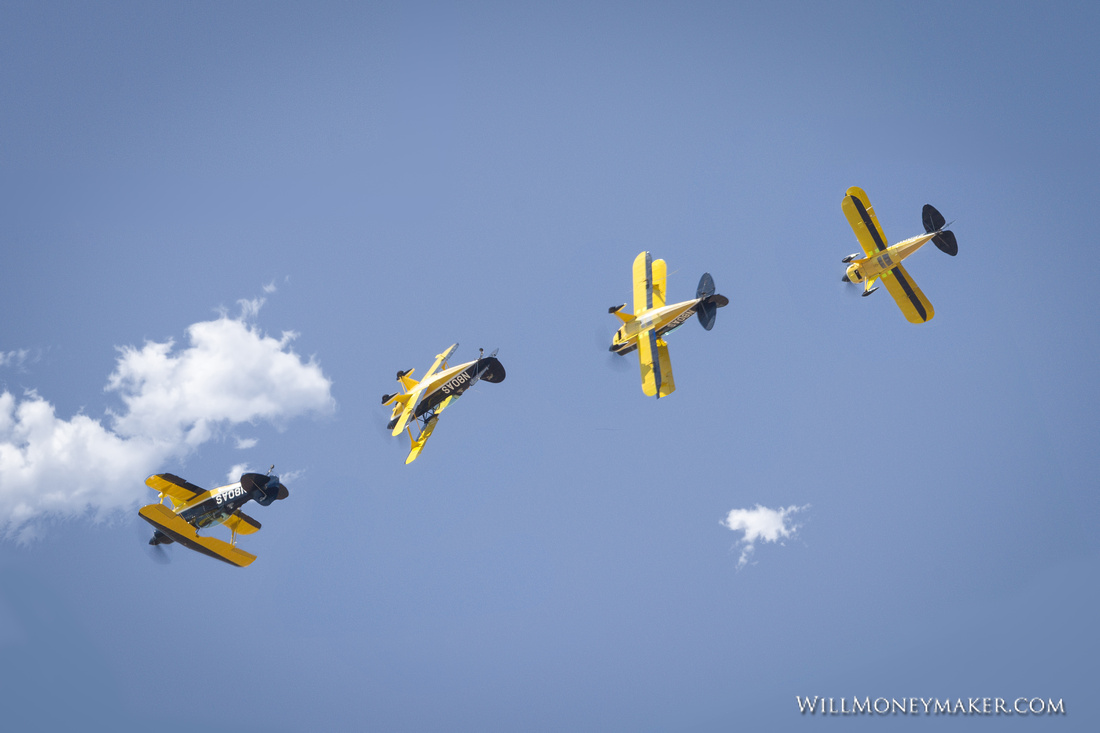 Finally, there are all the miscellaneous shots that complete the story you’re telling. This includes things like pit crews working, the images that you take as planes are readied for flight or photos of the show coming to a close. Who knows, you might even want to photograph the crowd or take candid images of observers in order to tell your particular story. No matter what, these images will follow standard compositional rules that you would apply to any other type of photography. Make sure your images are compelling and that they add to the story you’re depicting.

Even if you’re not an aviation aficionado, it is definitely worth your while to photograph an air show at least once. Few other events give you so many unique opportunities to create beautiful artwork — and yes, you can definitely create art at an air show. Air shows are exciting, exhilarating events, but if you relax, enjoy the day and put some of this advice to work, you’ll come home with stunning imagery.