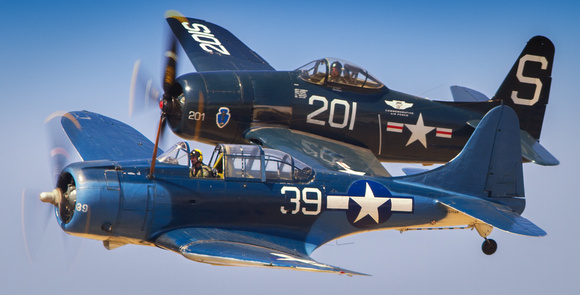 The Grumman F8F Bearcat (affectionately called "Bear") was anAmerican single-engine naval fighter aircraft of the 1940s. It went on to serve into the mid-20th century in the United States Navy, theUnited States Marine Corps, and the air forces of other nations. It would be Grumman Aircraft's final piston engined fighter aircraft. Modified versions have broken speed records for propeller-driven aircraft, and are popular among warbird collectors.

The Douglas SBD Dauntless was a naval dive bomber made byDouglas during World War II. The SBD (short for Scout Bomber Douglas) was the United States Navy's main dive bomber from mid-1940 until late 1943, when it was largely replaced by the SB2C Helldiver. The aircraft was also operated by the United States Armyas the A-24 Banshee.Although relatively slow and outmoded when it began its combat career, it was rugged and dependable and sank more Japanese shipping than any other aircraft during World War II.