A Quick Lesson in the History of Flash Photography

A Quick Lesson in the History of Flash Photography

Photography is the art form of painting with light, which means that it was only natural that someone would invent the flash, enabling us to paint with light even where there was none. Let me show you how today’s wonderful world of artificial lighting came about.

In the very earliest days of photography, only sunlight would do. Candlelight or lantern light just wasn’t enough to expose film, not unless you were willing to wait extraordinarily long times for results that simply weren’t that great. Artificial lighting took the photography world by storm in 1839 when a man named L. Ibbetson used the first artificial light to illuminate a photograph. This was the oxy-hydrogen light, created using a ball of calcium carbonate superheated by a flame of oxygen.

This lighting method was commonly referred to as the limelight. Interestingly, this is also the origin of the phrase, “in the limelight,” which we use to describe famous people or people under public scrutiny — because back then, famous people were photographed using actual limelights!

The problem with the oxy-hydrogen light was that the light produced was very harsh and bright. In portraits, people often featured bright white faces because the lighting was overpowering. Because of this, inventors continued working with the medium, developing new ways to provide lighting for photography. 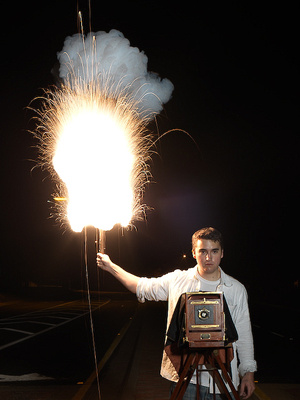 Demonstration of a magnesium flash powder lamp from 1909

The next major development began in 1862, with the development of flash guns that used magnesium and potassium chlorate powder. These flash guns were little more than a stick with a platform that you could use to hold the potassium chlorate and magnesium. They were connected directly to the camera, usually with the photographer holding the flash aloft, so that when the camera’s shutter actuated, it triggered the flash.

The flash itself was extraordinarily dangerous. These flash guns could produce more controlled bursts of light than the oxy-hydrogen lights, but the light was caused by the explosion of the materials. Needless to say, many photographers were injured and some even died attempting to use magnesium flashes. 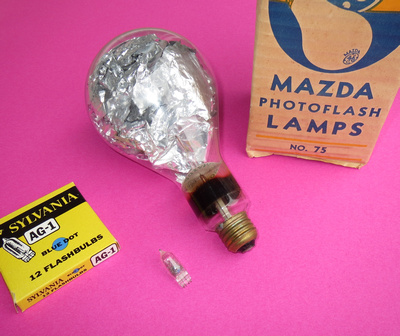 Flashbulbs have ranged in size from the diminutive AG-1 to the massive No. 75.

It wasn’t until 1930 that the first flash bulb became commercially available. These bulbs were created by Johannes Ostermeier and they were quite large compared to the flashes of today — roughly the size of a typical lightbulb that you would use in your home. The first bulbs were made using magnesium filaments and oxygen encased in a glass bulb. Again, they weren’t a perfect solution — sometimes the bulbs detonated to early, and sometimes the glass exploded — but they were definitely an improvement over the magnesium lights.

Around this same time, synchronization improved, making it much easier for photographers to produce the light when needed, during shutter actuation so that fewer shots were missed.

Over the next 30 years, bulb technology improved as well. Plastic replaced glass as containment for the bulbs since it was less likely to shatter on detonation. Eventually, zirconium replaced the magnesium because it provided a much stronger light. One major issue remained, however: Flashes could only be used once. Detonate it and you had to replace it. 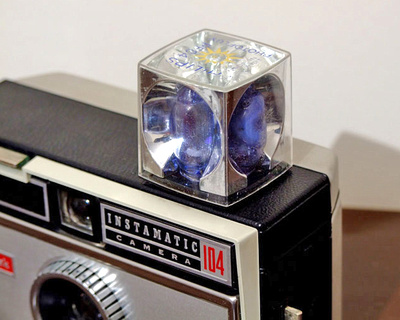 The iconic Kodak Flashcube, a lighting device that almost every older photographer remembers with mixed emotions, was the next revolution in lighting technology. When it hit the market in the 1960s, it meant that photographers now had a flash that could be used four times instead of once. This nifty little device featured four compact bulbs, so once you used one, it was necessary to rotate the cube and use a new bulb.

This led to other manufacturers creating similar devices, such as the General Electric Flipflash, featuring up to 10 bulbs that could be fired, one after another.

Even though Flashcubes and the Flipflash were taking off, photographers and researchers were working to develop yet another technology in the 1960s: The electronic flash. This was a battery-operated device that was mainly only available to professional photographers who valued it highly because it eliminated the need to buy expensive bulbs or cubes.

Over the next decade, improvements to flash gun designs were made, including the ability to adjust the quantity and quality of the lighting. By the 1970s, the public was starting to buy into this new technology and by the 1980s, bulb and cube-style flashes were rarely used in favor of electronic flashes. 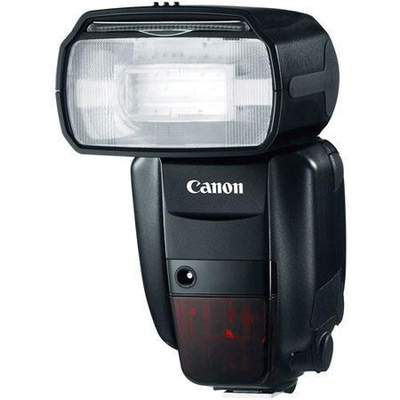 Today, we still rely on those electronic flashes for lighting, particularly when we are mobile, unable to drag all of our always-on studio equipment out into the field. The technology has continued to improve, giving us more control over lighting, but the principle is the same as those first electronic flash guns developed in the 1960s.

As the technology has improved, so have our methods. Once, it was necessary to connect each flash to the camera in some way, either via the hotshoe or through a cable, but now, many (probably most) photographers are using wireless technology to trigger their flashes. We also have more tools available to modify the lighting, either through adjusting settings on the camera or the flash or through tools like umbrellas, gels, and diffusers.

It’s hard to say where we will go from here. Some say that LED flashes will be the next big thing, especially since some smartphone cameras have multicolored LED flashes to produce a more natural effect. No matter what comes next, we’ve come a long way from the days when lighting meant risking your life to create a bright explosion.