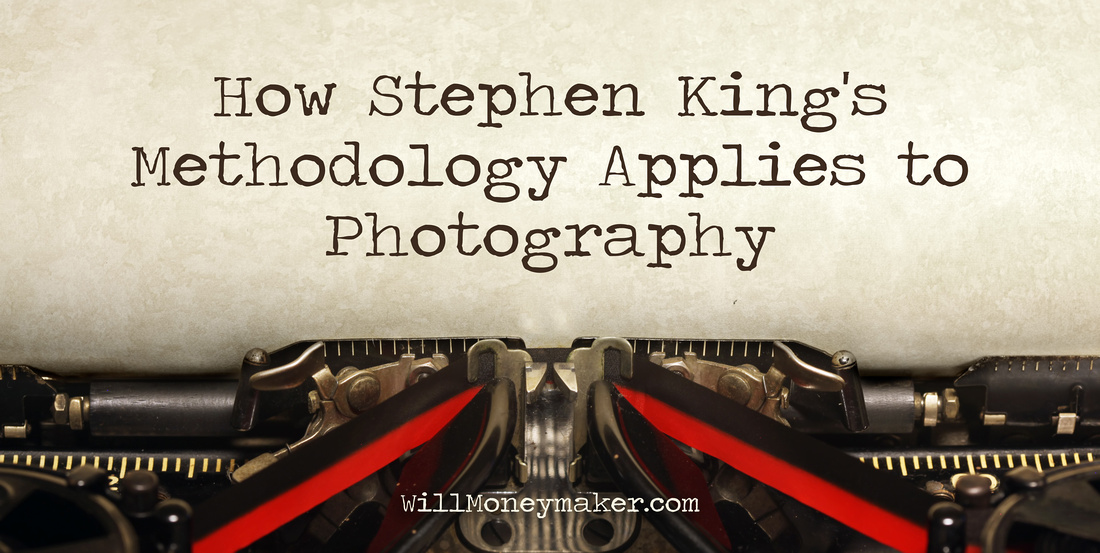 Stephen King’s On Writing is one of those required books that I had to read in cinematography class many years ago. While this book talks about the craft of writing, the pages are filled with insights that are applicable to just about everything. We photographers may not necessarily care so much about such things as grammar, dialogue and other technical elements that go along with the written word. It is in King’s methodology that the real value is for photographers — and truly, creatives of all types.

King’s methodology is one that is full of ideas and inspiration for photographers. You see, when King writes, he doesn’t sit down and outline a full story before he starts to flesh out the book. He doesn’t have a book in his mind, from start to finish, waiting for the right time to be committed to paper. Instead, he starts with one scene. In this scene, he has all the things a scene requires — the characters, the setting, the dialogue and exposition. But it’s still just a scene, with no backstory surrounding it, no events leading up to or following it. It is just one piece that will eventually become a moment in the broader timeline of the story. It is only after this scene is completed that he builds on it, adding the rest of the scenes to create a book.

How can that possibly translate to photography? At first glance, it seems like it doesn’t. That’s because each image that we create is a scene. So, if you tell a photographer to try creating one scene, he’ll be puzzled by what you’re asking him to do. Likely, that’s what he was already doing. And sometimes, creating that scene is easy. The creative ideas are flowing and we know the where, when and how of the photograph. Everything just falls into place. Other times, we're stuck, without a direction, unable to create the scene that becomes the final image. King’s methods can help you get through this and applying them to photography is simpler than you might imagine.

Think of King’s creative process in terms of how it relates to a finished book. That first scene that he creates? It might only be a few paragraphs or it could be an entire chapter. Whatever shape or size it takes, it is just one small part of the finished book — one small element, if you will.

What I mean by that is this: Rather than trying, as we so often do, to plan an image completely from start to finish, envisioning the setting, the subjects, all of the other details and even elements like lighting, color and composition, instead, when you find yourself stuck, just let all of that go. Sometimes, when we find ourselves in a creative rut, the problem is that we're just trying to juggle too many elements at once and there seems to be no satisfactory way to smash them all together. Choose one element to work with, distill your ideas to one small part of the image and let the rest of the story flow from that.

What element should you chose as the first piece of the puzzle before you? It could be anything. Perhaps you want to create something that involves a bird. Now you can use that element to start adding other elements. Think about the types of birds you might encounter. Which ones would you like to capture? What kinds of habitats do these birds live in, or what kinds of activities do these birds engage in? Can you find supporting elements for the final image in those lines of thought?

If you want to create an image featuring a crow, perhaps you should capture one that is playing with a shiny object or using twigs as tools. Or if you want to create an image of a parrot, perhaps you should capture him at play with a favorite toy or when the parrot speaks the words that his owners have taken the time to teach him. In this way, you can choose your one element and then start thinking about how that element relates to the rest of the story you could create, thus letting the image form organically from that one starting point.

Of course, your starting element doesn't have to be a bird. It doesn't even need to be the main subject of the image. Your element, the piece that you will build the rest of the story around, could be a setting, like your favorite woodland hideaway. It could be a type of lighting, like the golden rays shining through evening clouds. It could even be a color. What happens if you decide to make purple the central theme of the image? What kind of elements can you pull together that fit with this color to tell a story in your image?

As you can see, it is possible to apply Stephen King’s methods to your own work. The method is a simple one, when you get right down to it. Start with one small part of the project and then let your creativity branch out to create the whole.